Anti-ageing?  Bloom with a mushroom! 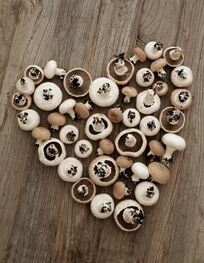 ​Fresh cultivated mushrooms contain anti-aging antioxidants. As they are readily available and affordable, eating them may be a better long term anti-ageing investment than those expensive creams!
According to a study by Penn State University eating ordinary white button mushrooms regularly, can prevent cancer and cardiovascular diseases, as well as have significant anti-aging effect. These mushrooms are an excellent source of ergothioneine, a powerful anti-aging antioxidant.
Free radicals are one of the main causes of aging because they cause cell damage. Several types of antioxidants are effective to neutralize them. Ergothioneine is one of the best to fight free radicals that is why it is an important antioxidant for anti-aging.
Wheat germ has always been considered an essential source for this antioxidant, but apparently mushrooms contain twelve times more ergothioneine.
So adding mushrooms to your salads or meat dishes could be the quickest way to that younger you!
Mushrooms can assist in the fight against breast cancer. The incidence of breast cancer is increasing in the developing world. Research is ongoing but, at present, the causes of breast cancer remain inconclusive.
According to South Africa’s, National Cancer Registry, breast cancer is the leading cancer for women with one in 29 South African women diagnosed with breast cancer in her lifetime. It is the most prevalent cancer among white and Asian women and the second most common cancer among black and coloured women – thus a disease that affects ALL women. 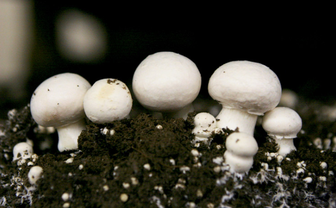 Recent breast cancer research studies, stretching from Western Australia to California are indicating that mushrooms have breast cancer-fighting properties.
Researchers at the University of Western Australia discovered in their study that the women who ate at least 10 grams of button mushrooms per day were 64 percent less likely to develop breast cancer.
An emerging body of science suggests that higher intakes of vitamin D may be associated with lower risks for some cancers, including prostate, breast, lung, colon and colorectal cancers. Mushrooms are the only vegetable that naturally contains vitamin D, a nutrient which many people lack.
Research done by Professor Shiuan Chen, Director of Surgical Research at City of Hope Hospital in California indicates that natural compounds found in white button mushrooms inhibit aromatase enzymes in the body (proteins that stimulate the production of oestrogen and which can promote the growth of some cancers, including breast cancer). So indications are that the consumption of white button mushrooms will help reduce the amount of oestrogen the body produces, and subsequently reduce the risk of breast cancer.
Mushrooms may also help prevent cancer by providing natural antioxidant compounds. Antioxidants work to neutralize free radicals (naturally occurring chemicals that can damage cells’ DNA and initiate the cancer process) and help to repair damage that has already occurred. In some laboratory studies, mushrooms displayed even more antioxidant power than tomatoes and carrots. So you can now add mushrooms to your well balanced diet (which should include plenty fresh fruits and vegetables) and know that you are eating for your health!
​

Cut the calories.... put mushrooms on the menu 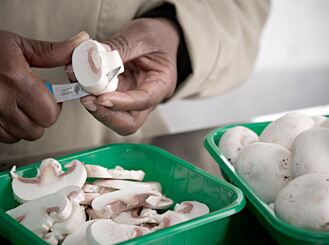 ​We all know that the best way to lose weight is to eat fewer calories. The good news is that mushrooms not only have a low energy density, they are packed with nutrients (the five B vitamins thiamine (B1), riboflavin (B2), niacin (B3), pyridoxine (B6) and folate; the essential minerals potassium, selenium, phosphorous and small, but nutritionally important, amounts of iron and they are delicious as well!
In the current climate of rising rates of overweight and obesity, mushrooms stand out as a true Superfood; they contain virtually no fat, sugar or salt and combined with their high water and fibre content. They are the ultimate ally when it comes to losing weight. Their versatility means that they can easily be added to a variety of dishes to add flavour without adding to the energy content. Research has shown that whilst their robust taste and hearty texture makes them a great substitute for meat and a filling and satisfying component of a meal, they also contain a lot fewer calories than meat.

A research study commissioned by the South African Mushroom Farmers’ Association (SAMFA) confirmed the essential role of mushrooms in a weight loss programme. The main focus of the South African study was to swap meat for mushrooms for four meals per week as part of a healthy balanced diet. The 9 participating male volunteers managed to lose a total of 31 kg, an average of 3.44 kg in six weeks, with the top volunteer shedding 6.9 kilograms and nearly 8% of his body weight! Additionally, the waist circumference of the volunteers dropped an average of 4.64cm overall, with the top volunteer dropping 9.5cm!
Of particular importance was that the volunteers found no real difference in palatability, appetite, satiation or satiety between the mushroom meals and the meat meals. Moreover, results showed that by substituting mushrooms for meat, they, on average, consumed 420 less calories per meal!
Mushrooms clearly play an important role in any weight loss programme not only because they are a low density energy food which contains the right nutrients but because they leave you satisfied after a meal – thereby preventing that fatal urge to snack!

Mushrooms contain virtually no fat, sugar or salt and are a valuable source of dietary fibre. They are brimming with the five B vitamins thiamine (B1), riboflavin (B2), niacin (B3), pyridoxine (B6) and folate; and contain the essential minerals potassium, selenium, copper, phosphorous and small, but nutritionally important, amounts of iron.

Mushrooms are a powerful antioxidant

​Mushrooms are one of the highest antioxidant vegetables in the world, in the same league as the red pepper and spinach. They were recently elevated to superfood status as they are one of the few sources of L-ergothioniene, a potent antioxidant, which was recently found to have its own transport system in human cells.
Led by Professor Robert Beelman, researchers at Pennsylvania State University found that just a handful of white button mushrooms have about 12 times more of the antioxidant than wheat germ and four times more than chicken liver. Brown mushrooms contained even more! L-Ergothioneine scavenges free radicals and protects the body’s DNA from damage. As a result of this research, the university advocated that white mushrooms be elevated to ‘superfood’ status.

​Studies have suggested that substances found in white mushrooms have the ability to lower blood cholesterol levels and so may be able to reduce the risk of cardiovascular disease. They are a valuable source of lovastatin, which has been found to suppress the activity of the main cholesterol synthesis enzyme. Mushrooms are a good source of fibre, in particular glucans giving them the potential to impact on cholesterol uptake from the diet.

Mushrooms are a significant source of selenium and riboflavin 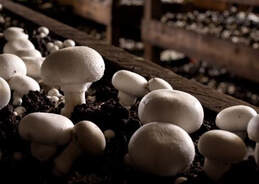 The humble white button mushroom (Agaricus Bisporus) has as much, and in some cases, more anti-oxidant properties than more expensive varieties.
Although the button mushroom is the foremost cultivated edible mushroom in the world with thousands of tonnes being eaten every year, it is often thought of as a poor relation to its more exotic and expensive cousins and to have lesser value nutritionally.
But according to new research published in the Society of Chemical Industry’s (SCI) Journal of the Science of Food and Agriculture in 2008, the white button mushroom has as much anti-oxidant properties as its more expensive rivals.
Anti-oxidants are believed to help ward off illness and boost the body’s immune system by acting as free radical scavengers, helping to mop up cell damage caused by free radicals.
Dr Jean-Michel Savoie and his team from the Institut National de la Recherche Agrinomique, a Governmental research institute in France, found that the anti-radical activity in white button mushrooms was equivalent to, if not more, than the better known mushrooms when they measured the respective mushrooms’ free radical scavenging ability.
The French team also found that the body of the mushroom had a higher concentration of anti-oxidants than the stalk.
Dr Jean-Michel said: “It can be reasonably assumed that white button mushrooms have as much, if not more, radical scavenging power as mushrooms currently touted for their health benefit. The good thing is button mushrooms are available all year round, are cheap and may be an excellent source of nutrition as part of a healthy diet.”