Highveld Mushrooms, the largest privately owned mushroom farm in Africa and has been operating for 40 years. We endeavor to improve mushrooms taste, quality and production standards continuously through always investing in the latest technology while complying with various food safety programmes.
​
The story behind Highveld Mushrooms
1979  Highveld Mushrooms was started by Chris Richardson and Colin Jacobson with plans to supply the mushroom processing industry.
At this stage the farm produced 4 tons of mushrooms per week, supplying a frozen mushroom processor. It was the first farm in
​           South Africa not to use horse manure in the mushroom compost, only chicken manure and other additives.
​
1980  Not long after the production came online the demand for processed mushrooms declined and Highveld moved to producing
​          predominantly  fresh product.

​1998  Highveld Mushrooms procured a second farm in the Vaal district, called Meadow Mushrooms, bringing the total production to about 60
tons per week. At this stage the farms supplied all major retailers under the Highveld brand. Since then, however, the retailers have
consolidated suppliers into their house brands, of which Highveld Mushrooms is still an active supplier.

2000  Investment began in the new state-of-the-art and efficient compost yard and tunnels to ensure better mushroom quality and
lower environmental impact. Highveld Mushrooms can proudly claim to being one of the most technologically advanced
mushroom growing facilities in the Southern Hemisphere.

2006  Chris’ youngest son Baring was appointed as Production Director for the Meadow Farm.

2015 Medallion Mushrooms moves from the Blaawklippen Vineyards site to their new state of the art farm in Joostenburgvlakte. 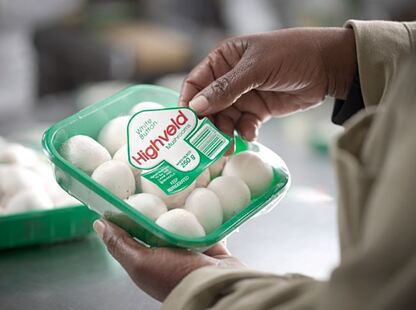 Highveld Mushrooms is proud to be affiliated to SAMFA - the South African Mushroom Farmers Association
www.mushroominfo.co.za/about-us-samfa/about-samfa